You are here: Home / Art

Kevin Reid is a graduate of the University of Dundee with a First Class Honours in English Literature. He has worked as a museum and art gallery assistant and is a qualified librarian and an English Language Teacher. Reid is a creator in various art forms: drawing, painting, poetry, and photography are all mediums he chooses to work with. Self-taught in drawing and painting, he is primarily an outsider in his visual art. In all its forms, his work leans heavily on emotionalism. Communicating and evoking moods, feelings and ideas are primary to his work and Pregnant Woman, one of a kind, is a fine example of this. His drawings have been published in Three Drops from a Cauldron, (Publisher?, 2018) and his photography in Wordless (Knives, Forks & Spoons Press, 2013). 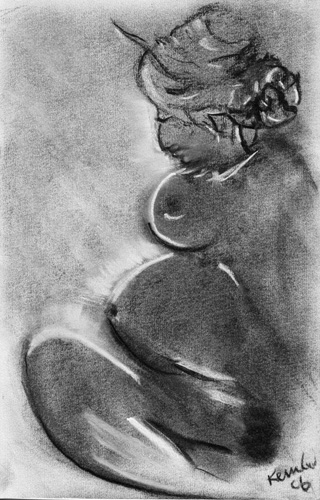 Dianne Kellogg studied watercolours with Florian K. Lawton (1921 – 2011), an American visual artist and a realist painter who painted Amish rural life near her home in Northeastern Ohio. His influence informs her eye for detail and interest in the natural world. This artwork of ghost pipes, or Monotropa uniflora as they are known by their Latin classification, was discovered in the undergrowth near her Pennsylvania cabin. In June 2017, she added it to her collection of fungi photos only to find that it was actually flora similar to mistletoe. Kellogg has manipulated the photo taken with a Galaxy VI mobile telephone by using halo and dry brush effects in Adobe Photoshop to create the digital image.

Dianne Kellogg is an Ohio native who married a “country boy.” She studied watercolour under Florin Lawton and has worked as a muralist and interior decorator. Other interests included photography and more recently digital art. Below are three examples of historical photographs about education that she has digitally manipulated. Images of Music and Flowers
by Yolanda V. Fundora

Yolanda V. Fundora is a Cuban-American artist born in Havana and raised in New York City. Her artwork is part of many private and corporate collections including the permanent collection of the Museum of Contemporary Art of Puerto Rico in San Juan. She has designed many series of digital images for books, textiles and other media. For AQ16, Fundora shares two images from her series, A Garden Alphabetized, and two from her book, Toward a Digital Aesthetic which accompany Meryl Stratford’s “Florida’s Oldest Tree” and Alida Woods “The Clearing” poems on their pages in this issue.

Yolanda V. Fundora finds her inspiration off the sidewalks and in the interior spaces of her digital world. She writes: “I’m mostly a visual being with an intense jealousy of the written word. I do what I can to share my physical and internal world through all things digital and occasionally with a pencil or two.” The Lowlands and People at Work
by Yolanda V. Fundora Yolanda Fundora has been making art in the digital realm since acquiring her first Mac 512K computer in 1985. Since then she has been in the habit of examining and commenting upon her internal and external worlds through a complex blend of digital technologies. Although well-versed in traditional painting and printmaking techniques, Yolanda believes that, for her, digital imaging responds best to the needs of contemporary art making and the demands of the modern lifestyle.

She has continual access to her audience through her Journeys Gallery@MONDO at www.mondosummit.com. That connection from viewer to imager and back again is vital to her production. Her artwork is also part of many private and corporate collections including the permanent collection of the Museum of Contemporary Art of Puerto Rico in San Juan where she had her second, one-woman show entitled “Toward a Digital Aesthetic: the Art of Yolanda Fundora.” In addition to her fine art, Fundora also designs textiles and illustrates children’s books. Her website is www.urban-amish.com.

Much of her inspiration and source material comes from her travels during which she is shaken from the taken-for-granted and forced to evaluate everything around her in a new light. Her recent visit to Amsterdam and a Midwest USA road trip are the inspiration for the images presented in Amsterdam Quarterly’s Summer 2014 issue.